Reintroduction of Big Cat in India...!!!

- March 28, 2019
Since last two decades wildlife activists demanding reintroduction of Cheetah in India and as  I am quite enthusiastic about Big Cat family, I started searching feasibility of this idea.
India was home of 6 out of 8 big cats including Cheetah till last century. Cheetah is the first mammal to got extinct in India in last thousands years.
Process of elimination of Cheetah was started much before 14th or 15th century.Persons from royal families killed hundreds of Cheetah for entertainment purpose. Last cheetah was hunted in India by Pratap Singh of Sarguja state in 1947 and officially declared as extinct in 1952.
There are some interesting stories about some royal personal like Akbar and King Shahu of Kolhapur who used to maintain friendly relationship with cheetah. Also they used cheetah for hunting of blackbuck, rabbits.
In 2000 India started negotiations with Iran for collecting tissue of cheetah which could be used for cloning. Also India demanded pair of Cheetah for Reintroduction . But unfortunately that deal was broken as Iran wanted Asiatic Lion from India and India was unhappy to give.
I think it was better deal for India because Asiatic Lion population got almost doubled in last two decades and it is quite easy for India to upgrade numbers of Asiatic Lions.
Have you heard about Canine distemper virus??Because of that virus India lost 30-40 Lions in just two months span. Still I think India had to exchange Lion with pair of Cheetah. Not only Cheetah but also with other Lion species.Asiatic Lions in India have very less genetic diversity and thus they are more vulnerable to diseases.They could easily extinct with one serious disease like CDV.
When subject of Reintroduction of Cheetah comes up some names of wildlife sanctuary also popup along with it,mainly Nauradehi national park in Madhya Pradesh, Banni grassland in Gujarat. Even some activists from North demanding for reintroduction in Uttarakhand( Cheetah could survive in cold region also ).
Ideal place for Cheetah habitat is grassland,lowland,Savannah region,steppee region with sparely located trees as high density of trees could obstruct there fast movement.Above conditions are mostly available in Rajasthans Bunny grassland ,desert national park also in Madhya Pradeshs Nauradehi wildlife sanctuary. African Cheetah is most suitable for Reintroduction as there habitat in Africa are similar to above places in India. 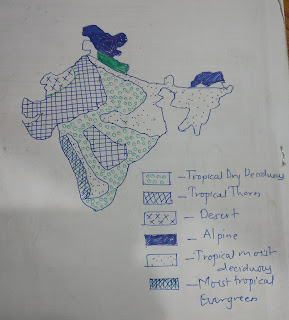 Map of Indian Natural Vegetation
It's not easy task even Nigeria is ready to give pair of Cheetah to India. Because we know already human wild conflict prevailing in India due to uncontrolled ruin of wildlife habitat. We facing incidents of wild animals entry in human residence. Due to this they are more prone to poaching. We should think about threats like Lions, Leopards wild dogs while introducing cheetah in Rajasthan.
Some people suggest captive breeding first before introducing in core forests.But Cheetah have unique social behaviour because of that 30% of all captive breed cubs could die within month.
In this situation we should focus on survival rather than blindly applying forest law.
Last month I read about Mishmi tribe opposed creation of wild life sanctuary. Truth behind that oppose was their healthy relation with wildlife. They consider Tiger as elder brother and hunting of it as Big sin. They tried to maintain healthy relationship with wildlife . New wildlife sanctuary could disrupt there age old relationship with Tigers and that's why they opposed.
We should use this nature and relation of tribes actively in conservation of wildlife. This will give jobs for tribal people and there development and conservation will go hand in hand.

Popular posts from this blog